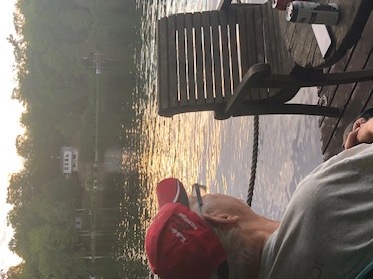 It is with great sadness that his family announces that Richard “Dick” Forsythe (1941-08-24), beloved father (Paul, Michelle, Jaime), Poppa (Nathan & Zoey), uncle, cousin and friend to many passed away after a brief illness on Thursday, January 13, 2022, in Ottawa.

He felt blessed to live at Half Moon Lake, his happy place since the 1950's. The lake is where he met, lived with, and eventually lost, the love of his life, Barbara Ann (nee Robinson). It was where he had happy times with his parents and Pigeon aunts, uncles and cousins, playing cards, having sing-alongs and arguing about nothing. The lake is where he famously water skied fully clothed, smoking a cigarette and drinking a rum and coke only ending up in the water after executing the perfect landing on a wet dock. It’s also where he spent time teaching his children, grandchildren, and just about anyone else who would listen, how to do things like fell trees, build docks and decks, back up trailers and swear at tractors. He was a loving, caring man who will be greatly missed by all who knew him.

Due to restrictions, a Celebration of Life will take place in the Summer of 2022.

Those wishing can contribute to the Half Moon Lake Fish Fund 162 Chemin Du Promemade Du Lac, Borwnsburg- Chatham, QC J8G 1K5 or by etransfer to lachalfmoon@gmail.com or a charitable organization of your choice.

To express your condolences or make a donation please click the tab at the top of the page.

A Tree of Remembrance for Richard will be planted in the McAlpine Forever Forest.

“Life should not be a journey to the grave with the intention of arriving safely in a pretty and well preserved body, but rather to skid in broadside in a cloud of smoke, thoroughly used up, totally worn out, and loudly proclaiming “Wow! What a Ride!”